Sunday, March 13, 2016 was my first planned chase and second overall. The day before, I drove from Topeka to a hotel in North Little Rock, Arkansas. I drove into the hail core of a strengthening supercell south of Malvern, Arkansas and lost both windshields. While overall a failure, a good story came out of it, along with some lessons for the future.

For months, I had planned on chasing during spring break from March 12-20, 2016 if a good setup emerged. The week before, I was looking at the possibility of a significant severe threat for much of the country the next week, but it looked like it wouldn’t pan out. However, a compact shortwave was progged to quickly move across the country on Sunday the 13th. A few days out, I had decided I would target this event. Storms would fire in Western and Central Arkansas during the afternoon of the 13th and move eastward into more favorable terrain in Eastern and Southeastern Arkansas during the early evening. Initially, my target was Lonoke, Arkansas and I therefore booked a room in Little Rock.

The day of the event, it looked as if initiation would take further west in the rugged terrain of Eastern Oklahoma and Western Arkansas. I would thus move to Malvern, Arkansas in early afternoon. This would be the first of many mistakes I made on the chase.

After sitting in a gas station parking lot in Malvern for a few hours, storms to my southwest began to get organized. There were already tornado warned storms in Western Arkansas, but that was too far for me. The storms became severe as they approached Arkadelphia, and I made my move southwest. I got on I-30 westbound to Social Hill, Arkansas and drove south along County Road 15. Between the trees and hills, I could get some glimpses of storm structure, and briefly saw a wall cloud in the distance. I looked for an eastbound road in vain. My brand-new phone with Verizon service had lost data, and I no longer could rely on radar. I contemplated turning around before foolishly continuing into the small town of Midway, Arkansas. This was when things started to get interesting.

As I got into town, I thought I would be able to get a better view of the storm. Unfortunately, as soon as I drove into Midway, nickel to quarter sized hail began falling in torrents along with heavy rain. Unable to see well, I parked my car underneath a tree on the side of the road. I had unknowingly put my front right tire into a ditch. I sat in my car for several minutes as the hail (within severe criteria, but not overly large) continued to fall. The hail then stopped, and some light rain was all that was left.

By this point I had realized that I was stuck. I tried putting the car in reverse, then drive, then reverse again, but to no avail. I began to think about calling a tow truck. Several cars drove by me unawares of my predicament. Data returned to my phone, but it was too late.

Looking at RadarScope, I read the Severe T-Storm warning for the storm I was in. The hazard statement read: “Baseball size hail and 70 mph winds. This is a very dangerous storm.” Somehow I knew I was in for a beating. Frantically I tried to get the car out of the ditch, but it was no good. The first stones hit the roof, then one bounced off the hood. I was still looking at my phone when a tennis or baseball hit my roof and knocked the plastic cover off the driver’s side roof light. It was at this point I began to worry. Then a few hit the back windshield, cracking it, while another couple cracked the front. I grabbed my small suitcase I was using to travel with to cover my face and eyes from glass shards. As soon as I did so, the back windshield shattered into a thousand pieces as hail continued to pound my car. More stones hit the front windshield, with several visible impact marks.

After the hail receded, I got out of the car to check the damage. The back windshield was gone, and the front was cracked beyond repair. The roof was covered in dents. At this point, I was just thankful a tornado didn’t spawn on top of me. Soon after the storm ended, most of the people in the town came to help me. I got bottles of water, cookies, Mountain Dew, and some people helped me cover my back windshield in a tarp. Triple A took about two and a half hours to get to me because of a big accident on the interstate. The ride home was safe and sound, despite having a tarp for a back windshield and several cracks on the front.

While I made some rookie mistakes, I learned from the experience, and hopefully next chase will be better. 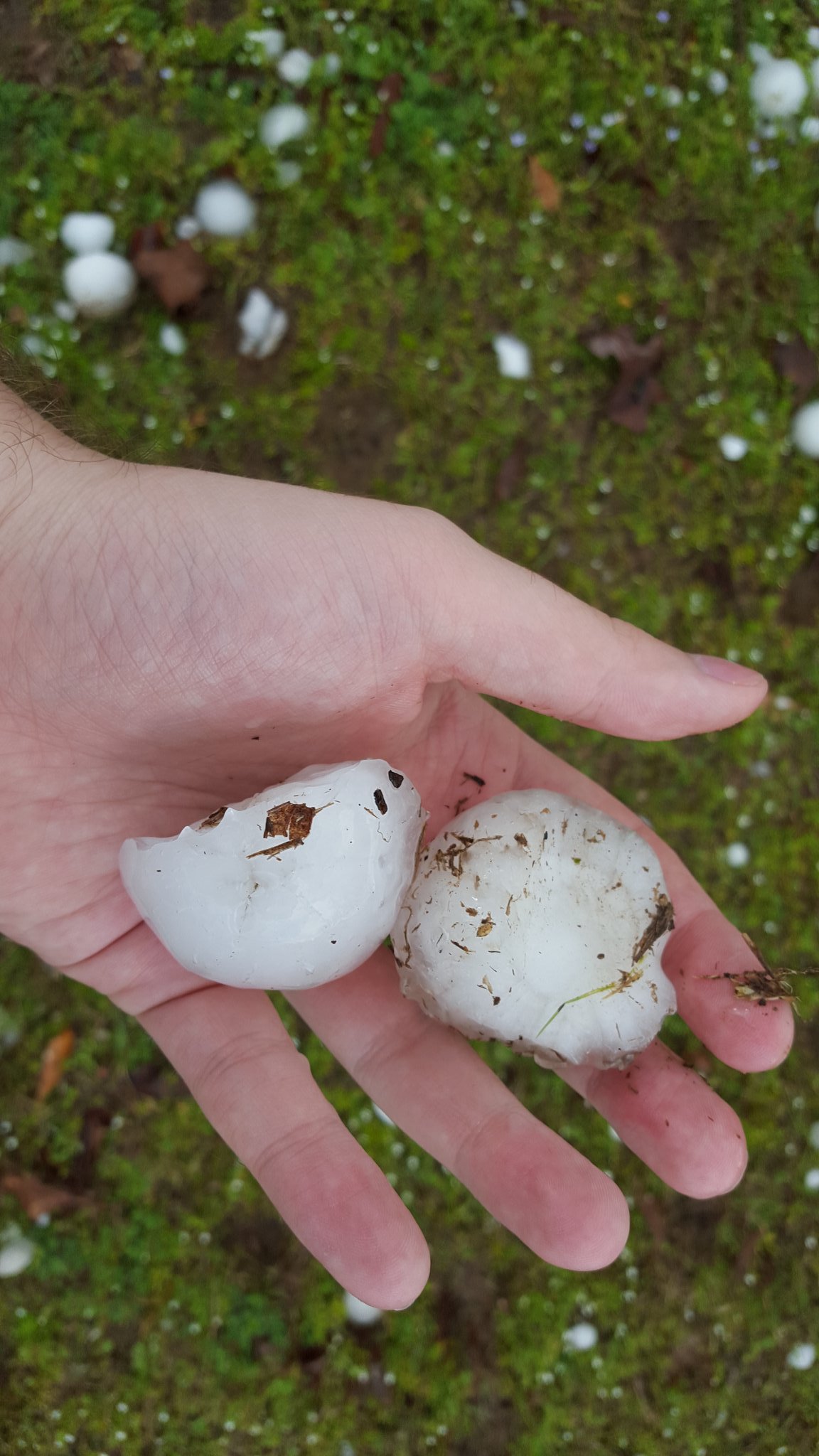 Large hail after about half an hour of melting. Hail was likely as large as tennis ball size, possibly larger.

The Midway, Arkansas Town Hall. The tree where I parked my car under is on the far left.

Front windshield, which had to be replaced